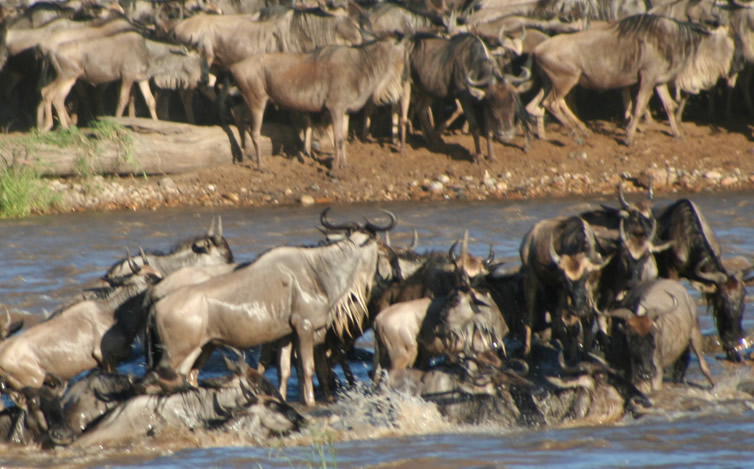 This wildebeest migration may differ from one year to another depending on the regional weather, and the rains among other environmental aspects. The lengthy rains that begin in the month of April result in large fields of nutritious verdant grass within the Masai plains. Large populations of wild animals begin entering the spectacular Masai Mara Reserve in the month of June joining other resident wild animals. During this period, there is plenty of grass plus an abundance of water supply to feed the animals. This actually is the most horrible time for the adjacent Masai communities as their livestock have to struggle for the well-grown grass with the numerous wildebeests.

The lengthy migration in Tanzania comprises big wildebeest herds, antelopes, numerous zebras, and gazelles. Among the Predators are lions, cheetahs plus leopards. The long mature grass offers a wonderful hiding area for the large cats. Nonetheless, the hunting activity is not challenging since there are large numbers of wild animals. The hunting activity does not in any way interfere with the migration cycle nor does it affect the wildebeest calving of a fresh generation.

Another big hindrance during this migration comes at the time when the wildebeests are crossing River Mara. Because of the heavy rains, River Mara is entirely flooded with high water levels, and this is a big danger as some of the wildebeests drown while trying to cross. The large very hungry crocodiles plus the hippos also are an additional threat to this great herd. However, during this period, it is the best moment to witness the numerous animals as they congregate around the river banks as try to find a way of traversing the flooded river. There is an abundance of food for the giant Nile crocodiles plus the hippos especially as the animals drown in the water.

The Masai Mara Serengeti once-a-year wildebeest migration occurs between the months of June and the month of October. This spectacular wildlife show attracts hundreds of visitors from various parts of the world. A ride on the hot air balloon will provide excellent game viewing. Visitors are advised to book their accommodation in advance. The prices at this time are also high. Accommodation is usually offered in lodges and tented camps. Watching the wildlife in the remote area of the Masai Mara and spending nights in the bush is the best experience one could ever get.

The annual wildebeest migration in the Masai Mara has been feted as one of the wonders of the World. This is because the view of the animals is so spectacular and tourists from all over the world visit Kenya just to witness this. Progress by the animals can be captured from hot balloon rides or even from the ground. This offers one an opportunity to take amazing photographs and videos of the animals. However, this migration is not easily predictable as it largely depends on seasonal rains. Despite this, the animals have maintained a fairly constant movement which has been on record since the 1960′s. With all the excitement brought about by this migration, one group of people, the Masai do not share in the excitement. This is because the wildebeest pose a threat to their animals due to competition for grazing pastures. The Masai are also fatigued with the migration as it brings with it a variety of animal diseases that can, without doubt, be transmitted directly to their livestock.

For those interested in observing the amazing migration, there is a variety of accommodations in the different camps within the Mara. However, it requires that one book in advance since during the peak months from June to October majority of the camps are generally full. Throughout this period several international plus local tourists flock to the area for accommodation and sadly, those that are unable to book in advance have no alternative but to wait the following year for another opportunity to observe the migration.

A Safari throughout the unending Serengeti plains is a memorable experience; it reaches something deep inside us, making unforgettable experiences.

A visit to the Serengeti found in Northern Tanzania is at the same time intriguing as well as exciting, formed by the amazing harmony between wildlife, landscapes, and the resident people.

The wonderful migration is an all-year-round migration. At times the migration is spread over a huge area, while in other cases the animals are centered as a huge mass of more than one million animals.

This is the only surviving massive migration on the earth and as a result, lots of people wish to witness this wonderful event.
Actually, the rains are critical for this continuous migratory cycle; and because the weather is unforeseen so is this migration. Lots of individuals try to anticipate the location of the animals; in case these rains are on time, and for a specified duration then based on past experience their predictions are correct. On the other hand, recently these rains haven’t been on time or have perhaps failed, leaving a number of safari planners with clients within the wrong part of the Serengeti.

The way to solve this challenge involves some work on your side. Do your research on this and reserve with care; here are some simple steps to serve as standard guidelines.

In case you reserve your safari beginning late July to late September, it is important to book ahead of time. This season is madness.
In case you ever hear stories of over-crowding within the Serengeti the possibilities are the safari happened between these mentioned months, and most likely this safari was within the Seronera Valley found in central Serengeti. This particular area within Serengeti possesses a good dependable number of animals throughout the year.

A number of safari companies are laid back and only send clients to this section of the Serengeti. Make sure your safari includes at least 2 sections of the Serengeti; one being in the south and the other in the northern section of this large park based on the time of the year.

Another season I would prefer you leave the real reservation of the safari right up until a couple of weeks prior to your departure. In case it is an off-peak season which is from March to the finish of June, then your safaris (mainly accommodation and also to a small extent transport) are cheaper. Keep looking into the location of this migration after which reserve your accommodation keeping that in mind.

How it is a possibility to keep track of the location of this migration could be easier in theory. There are lots of websites that assert to possess frequent updates however they can be 2 years behind since their last update.

To simplify life currently, there are a number of semi-permanent good tented camps within the Serengeti. Don’t allow the ‘tent’ bit to discourage you; these are large tents having double beds plus furniture as well as en-suite bathrooms. A number of them have private butlers for each and every tent.

Be careful and mindful of your safari – actually, the planning is part of the adventure. Research a bit and ensure your ground agent within Tanzania is able to make this safari special. A number of them are somewhat sadly just interested in the money and every client is actually a number and they’re hesitant to make modifications to itineraries. Watch out for such companies because Tanzania, as well as the Serengeti, are perfect; ensure your safari encounter is as impressive.

This Migration began early this season and actually was in high gear by the beginning of July. The spectacular scene of thousands of wildebeests and zebras moving around to adhere to the grazing is among the popular features of this wildlife calendar and also of any safari vacation. These animals have begun crossing River Mara, which following the rainy season has increased in level and so are running from the waiting crocodiles. Approximately more than Two hundred thousand animals die each year on this voyage of almost 2,000 miles.

The migration belongs to a yearly cycle that has gone on for centuries. From January up to March these animals – more than 1.5 million wildebeests and 500,000 zebras – can be observed down within the southern plus eastern Serengeti, within the Ngorongoro area found in Tanzania. Right here they produce their calves, normally in a really short time of just a couple of weeks. Not many are born later, small, and evident targets of this migration a couple of weeks later. All these locations possess fewer predators, like the big cats as well as hyenas, therefore are safer for their young calves, up to 50 % of a million of these – to place their initial steps.

Between March and May, these begin moving to the west plus north, going to a location of grasslands referred to as the western corridor. Here they separated into 2 groups, and one head further west compared to the other, always moving to make sure there was sufficient grazing for the large numbers. At the conclusion of May, just as the end of the long rains, the rutting season starts, the big males continuously fight over the herd as well as territory, stopping not to eat or even sleep.

in June as well as July these herds proceed northwards, the 2 migratory routes then meeting again as the animals look through the remaining regions of grazing. Sooner or later they arrive at River Mara which is running deep and also fast following the annual rains. These animals are anxious for food plus drink, so crossing this river is their only hope of survival. In case the rains happen to be moderate, the crossing is not so deep and simpler, however, normally the river is moving fast meaning a tough swim as well as steep banks due to continuous erosion. Thousands of these animals die sometimes drowning or being trampled or even being eaten by the giant Nile Crocodiles that have themselves been awaiting this bi-yearly feast. Hyenas plus Lions, as well after a simple meal, will hold out and then drag bodies from the banks of the river. This is usually an excellent place to witness the migration while on a safari holiday, or game viewing by the river banks of Mara River as the scene of death, as well as survival, unfolds right before you.

As soon as they are safely over, the animals can graze on the fertile grasslands within the Masai Mara up to October, facing the threat of the numerous predators within this region. Cheetahs, Lions, and leopards feed their cubs on this feast, however, the numbers are really great so it makes no great impact on the overall population.

During the autumn this migration is overturned. The modest rains have already fallen within the Serengeti, making certain the restoration of the grasslands presently there, therefore the wildebeests return south, re-crossing the river and showing up back to their calving locations in January and February the location where their cycle will begin yet again.