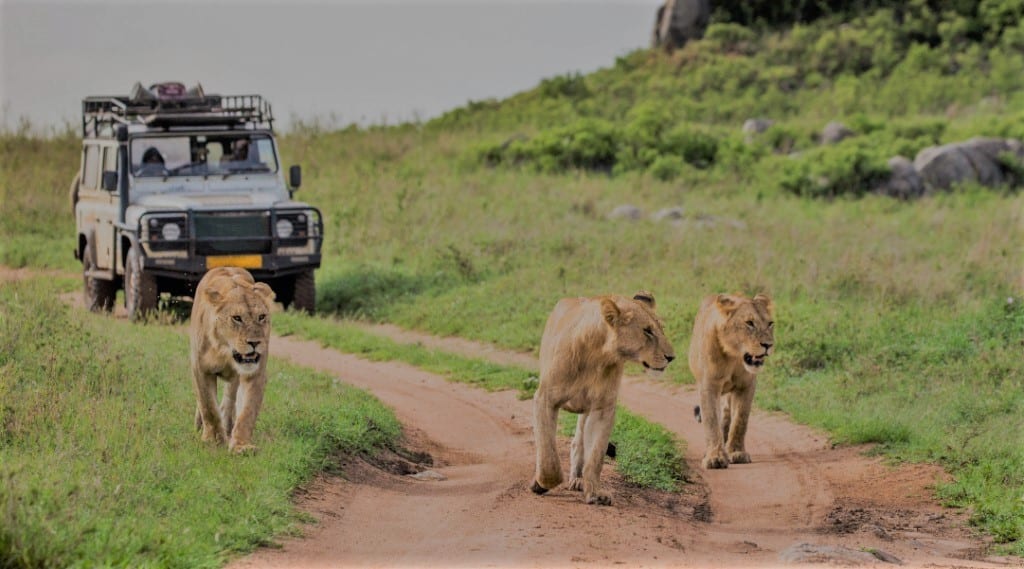 Safari experiences in Tanzania are best enjoyed from the 4 various circuits/areas each with its own attractions. The 4 safari areas in Tanzania include the Northern Safari Circuit, the most visited Tanzania safari route that covers Serengeti National Park, Lake Manyara National Park, Kilimanjaro National Park, and Ngorongoro Crater/Conservation Area, and Tarangire National Park.

Southern Tanzania, is a remarkable Tanzania safari circuit with amazingly hidden secrets including the Ruaha National Park, Selous/Nyerere, Udzungwa Mountains, and Mikumi among others. Western Tanzania takes you to the extreme side of Tanzania to visit Katavi and Mahale National Parks to enjoy absolutely off-the-beaten-path Tanzania tours. Tanzania’s coast and islands offer a great chance to visit some of Africa’s beautiful beaches, particularly on Zanzibar island.

Serengeti National Park covers 14763sq.km, featuring 3 distinct sections- the Southern or Central also known as Seronera Valley, Western corridor marked by the Grumeti River and North, Lobo section. Serengeti ecosystem is arguably one of the oldest in the world and it is characterized by distinct vegetation. It is a wildebeest migration paradise offering tourists on Tanzania safari a chance to watch millions of wildebeest, thousands of zebras, and gazelles as they move from the North to the Southern Plains. The Great Migration is, without doubt, a major highlight of Serengeti safari and also Tanzania safari. Other than wildebeest, zebras, elands, Serengeti shelters several leopards, lions, cheetahs, 500 birds, and others.

Tanzania is one of Africa’s leading big game safari destinations. It is one of the best safari experiences in Tanzania any nature lover shouldn’t miss. The best places to go for a big game safari (elephants, rhinos, buffaloes, leopards, and lions) in Tanzania include Tarangire National Park, Ngorongoro Conservation Area, and Serengeti National Park.

Tanzania is not known for its amazing wildlife safari experiences but also for thrilling hiking adventures. Mount Kilimanjaro is most visited for mountaineering or hiking experiences where hikers get to conquer 5895m. It is a free-standing mountain on earth and the tallest with snow-capped peaks. The best months to undertake mountaineering adventures are July, September and October/January, February, and early March.

Other incredible hiking destinations include Mount Meru set just adjacent to Mount Kilimanjaro. Mount Meru is 4566m high and it is the second-highest peak in Tanzania. The Ngorongoro Conservation Area is a picturesque area with one of the world’s natural wonders- the Ngorongoro Crater. The key hiking spots include Empakaai crater, Makarot peak at 3130m, and others. The Udzungwa Mountains which is 6 hours’ drive Southwest of Dar-es-Salaam. The hikes not to miss include Luhombero peak 2579m and Mwanihana peak 2080m.

Zanzibar is a splendid place noted for its spice-scented and beautiful turquoise water, and sandy beaches among others. Zanzibar is a semi-autonomous part of Tanzania and it is an amazing place for beach lovers and honeymooners on Tanzania safaris. It is home to Stone Town a designated UNESCO Heritage Site with several historical sites worth visiting. There are many ways to explore Zanzibar including embarking on the Spice tour, Stone town tour, and beach holiday.

Tanzania boasts of its over 4 million wildlife including over 20% of the large mammal population in Africa. The country’s diverse wildlife species include giraffes, hyenas, elephants, cheetahs, wildebeest, hippos, zebras, buffaloes, and others. There are also over 25 reptiles, 1300 bird species, and others.

Best time to go for a safari in Tanzania

Safaris in Tanzania can be conducted at any time of the year. The best season to plan or embark on Tanzania safaris is during the long drier months of July, August, and September-the best months to enjoy the Great Migration or to embark on a beach tour. March, April, and May are often avoided by most visitors due to heavy rains.

What to carry for a safari in Tanzania?