The Ngorongoro Conservation Area is a natural property with huge expanses of craters, lakes, forests, rivers, streams, savannah grassland and Woodlands located in the Northern Arusha region of Tanzania. At first, it was part of the original Serengeti national park in 1951 but later gazetted as multiple land use in 1957 to forge a coexistence of wildlife species and the semi-nomadic Masai pastoralists. In 1979, it was added to the list of UNESCO World heritage sites. Although the Masai people were moved out of the property, they still exist and practise cattle keeping within the green fields. 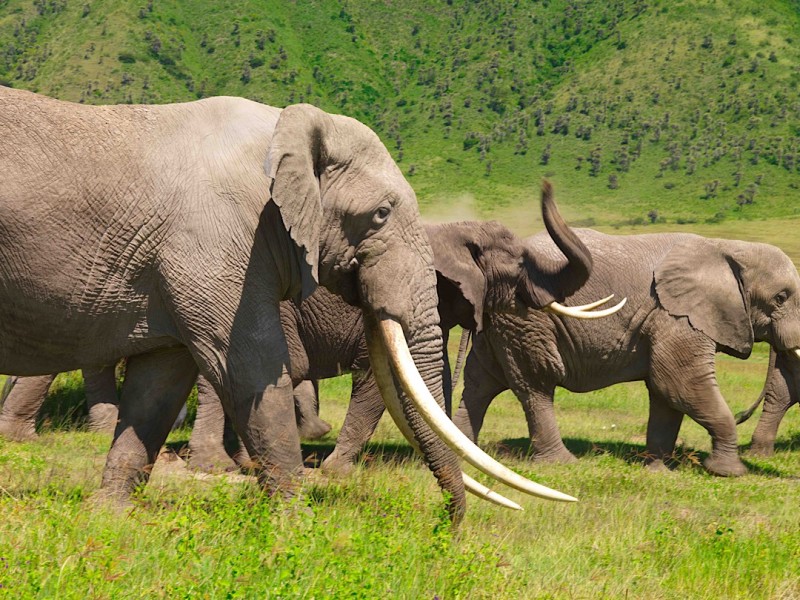 Ngorongoro Conservation Area is majorly dominated by volcanic formation features, namely the Ngorongoro crater and the Volcanoes of Olmoti and Empakaai which were created a million years ago. Ngorongoro Crater is the most iconic feature and it’s where the conservation area’s name was derived from. The crater is the largest intact volcanic caldera in the world. Empakaai Volcano has a crater lake that almost occupies half of its caldera floor. Around the area, there is Lake Magadi and Ngoitokitok spring which are the main source of water for most of the wild animals and also for the cattle of Masai pastoralists, particularly in the dry spells. The vegetation that spreads around the volcanic features and the entirety of the conservation area hosts an astronomical population of animals and some of them are restricted to the area, notably the black rhinos and the African hunting dog. Having remarkable natural features and a wealth of wildlife species, Ngorongoro Conservation Area is truly paradise on earth!

Background of the Ngorongoro Conservation Area

Archaeological research has been subjected to Ngorongoro Conservation Area for over 80 years, human fossils were discovered at Olduvai Gorge dating back about 2 million years ago. The second settlers after the first hominids (stone age people) were the Mbuli and Datooga who were pastoralists and resided in the region for about 2,000 years. At the start of the 19th century, The Maasai from Sudan conquered the area and pushed the Mbulu and Datoog to the distant parts of the Ngorongoro Conservation Area.
No European explorer is known to have come to the place until Oscar Baumann in 1892.

In 1902, the first game preservation ordinance was inducted and hunting was allowed to only permit holders in 1928, hunting was abolished on all areas of the crater rims except on a few farms. Ngorongoro conservation area was included as part of Serengeti national park in 1951. Later on, in 1959, it was gazetted as a multiple-use land where the wildlife coexisted with Maasai nomads.

The Ngorongoro Conservation Area Authority was created (under the game park Law act of 1976) to manage most of the conservation area territories and the crater. A few years later in 1979, Ngorongoro became a UNESCO heritage site since it carried so much history and wildlife species.
The Maasai were pushed farther and restricted from using the Conservation Area in 2009 though the restriction has brought conflict between Maasai pastoralists and the conservation authorities. Mediation has been made by International Union for Conservation of Nature (IUCN) between the two bickering parties.

Ngorongoro crater is the masterpiece of the Ngorongoro Conservation Area, it is the largest inactive and intact volcanic caldera on earth. The colossal crater came as a result of an explosion of a volcano that sunk into its ground a million years ago, Ngorongoro is 2,000 feet in depth with a total surface area of 100 square miles. In 2012, the crater was listed among the seven wonders of Africa at a nature conservation event in Arusha Tanzania. Due to the rich expanses of the crater consisting of savannah grasslands, every rainforest and high open moorlands, a plethora of animals call it home. The animals include; topis, gazelles, oribis, impalas, zebras, waterbucks, lions, leopards, buffaloes, black rhinos, wild dogs and many more

Famously known as the earliest human habitat, Olduvai Gorge is a stretching lowland of about 50 kilometres sandwiched by Ngorongoro crater and Serengeti plains in the rift valley area. The place hardly receives rain since it is located on the rain shadow side of Ngorongoro highlands. It is an area visited by a great number of tourists because of its rich history and ancient works that were discovered by the Leakey family. A small archaeological museum around the gorge exhibits the works of the Leakey family and ancient human fossils of over 3 million years ago.

This is an alkaline crater lake in the northern part of Ngorongoro at the borders of Kenya. It is a very popular abode of the rare lesser and greater flamingos. Due to its rich nutrients of salt and algae, Lake Magadi compels lots of birds species on its waters and shores. Animals like hyenas and jackals come to feed on the corpses of the dead birds and lick the salt of the lake too.

It is a forest that comprises unique yellow and thin acacia trees that offer shade to animals like elands, bushbucks, rhinos and elephants. The forest is also a great anchorage for birds.

This is an integral natural feature in Ngorongoro Conservation Area. It has very rich vegetation and it is one of the places wildebeests, Gazelles and Zebra use as a route from and to Serengeti during their annual migration.

These are less explored active volcanoes in the area. They are visited by only brave hikers who climb to view the boiling lava at the crater.

They are popular large volcanic calderas in the natural reserve. They are great natural places for walking safaris to enjoy different wildlife species. Maasai pastoralists are spotted at these sites rearing their livestock.

Tourism in The Ngorongoro Conservation Area

Ngorongoro Conservation Area is one of the most popular classic safari destinations in Africa. Hundreds of thousands of people visit the natural jewel to explore and enjoy its innumerable wildlife species. For tourists to enjoy the wilderness of the area and its living species, tourist activities like Nature guided walks commonly known as walking safaris and camping tours are organised along the rim of the crater. Game drives are also available around the entire conservation area. Ngorongoro is one of the areas where the great migration of over a million wildebeests, zebras and gazelles occurs. The area is a path of the ungulates from and to Serengeti plains. Therefore, tourists have opportunities of experiencing this interesting and exciting natural phenomenon while touring Ngorongoro.

The cultural tours around the Masaai village or Hadzebe tribe are present at Ngorongoro. The other natural beauties to marvel at are Olduvai gorge, Lake Magadi, Lerai Fever, Empakaai Crater, Nasera Rock, Ol Doinyo Lengai and Oldeani Mountain to mention but a few.

Threats to the Ngorongoro Conservation Area

There is a growing number of human settlement and their livestock hence competing for space with wildlife in the area. Albeit the reserve authority restricts the settlement of people in the area, the population has kept on escalating for instance in 1966, there were only 9,000 people in the area and today, the number is 70,000.

Tourism developments have somehow led to the degradation of the natural environment. Accommodation facilities and roads have been constructed in the environs that were abodes of animals. This has led to the loss of habitats. The wastes from the accommodation facilities similarly degrade the fragile environment. In addition, tourist vehicles emit fumes that pollute the air.

Poaching is another major threat to the national reserve. Numerous raids are carried out on animals especially the ungulates for food and trade. This has led to a great decline in the number of animals.

What is done to solve the problems?

Ngorongoro conservation Authority has made efforts to garner finances to gear up the conservation works at the National reserve through tourism and lobbying from international conservation organisations. Though their efforts have been hampered by the emergency of covid-19 which has led to low revenues from tourism.

Some of the funds got from tourism have been repatriated to the local communities to uplift their livelihood so that they don’t look at the wildlife and the conservation area as their source of income.

The Authority has also set up laws restricting people from settling within the conservation area. The domestic animals are controlled from entering the wilderness.

Travel Information about the Ngorongoro Crater and general Conservation Area

The main means of transport to reach the Ngorongoro Conservation Area are road and air. International travellers mostly use Arusha International Airport and then get to the national reserve by road travel or flying with a scheduled charter plane. Charter flights from Arusha to Lake Manyara are available every day. It is advised to book your Tanzania safari to Ngorongoro crater with a local tour operator for a better arrangement of a 4×4 vehicle with a driver-guide to take you to the park, Or Reserve a charter flight to the park.

When to visit the Ngorongoro National Reserve?

Ngorongoro crater is an evergreen wildlife gem. It is visited any month of the year though most preferably the period between January-Mid March, June -October and December. These are the dry months where the fields are short and the skies are bright thus being the perfect time for viewing game and photograph taking. More so, in June-October, there are opportunities of encountering the great migration of wildebeest and zebra around the region.

The wet months (April-May and November) also come with some benefits like the breath-taking green vegetation which attracts lots of birds to the area and the animals too look super healthy and beautiful. The reserve is less crowded in the wet months.

There are a number of accommodation establishments to stay in while on a Tanzania safari to Ngorongoro crater. They are mainly nestled at the top of the rift valley and on the crater edges. The facilities comprise permanent tented camps, mobile camps, eco-lodges and cottages. The lodges vary in the services offered to the travellers by the rates charged. Some of the popular accommodation facilities at Ngorongoro include Ngorongoro Farm House, Ngorongoro Crater Lodge, Lemala Ngorongoro, Ngorongoro Rhino Lodge and the seasonal Kirurumu Ngorongoro Camp.