Lake Manyara National Park is yet another of Tanzania’s small parks. It extends over an expanse of 320 sq kilometers.

This park is located at the bottom of the western Great Rift Valley escarpment. ‘Manyara’ is a local Masai word for the ‘Euphorbia Tirucalli plant’ grown at the enclosure or boundaries of many Masai homesteads. Close to 231 sq kilometers of the park is occupied by Lake Manyara a lake whose waters are alkaline. The alkaline water attracts several birds and among the habitats of this lake are the numerous flamingoes which are prominent of all more than 400 species of birds.

Lake Manyara National Park was principally conserved to protect the resident elephants. These are commonly seen in large populations roaming in the park as compared to other Tanzania parks. Other than elephants, additional animals frequently seen include buffaloes, tree-climbing lions, hippos, cheetahs, blue monkeys, the Masai giraffes, and baboons. 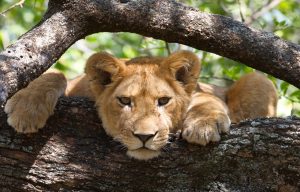 Today the explanation as to why the Manyara lions prefer relaxing up in the tress as well as climbing trees remains known. But special about this park is that it can be entirely toured in about two hours making it a perfect safari destination for tourists with limited safari time. Furthermore, the park has a blend of vegetation covers among which are the water forests, swamps, acacia trees, grasslands, and then the lake.

Lake Manyara possesses very spectacular scenery which permits tourists to actually sit and unwind as they get pleasure from the game viewing. Among the additional activities that you can enjoy in Lake Manyara National Park are swimming, canoeing, horse riding, cycling, safari walks, cultural activities, and photographing. What is more, is that one can explore Lake Manyara National Park at whatever time all year round. ‘Mto Wa Mbu’ which refers to the village “mosquito creek” is adjacent to the park and it is here that majority of the visitors stop to purchase some carvings at the curio market. Good to note is that this is a perfect place to try out bargaining skills as you can actually acquire some items at fewer prices hence saving.

How to Get to Lake Manyara

What to do while in Lake Manyara 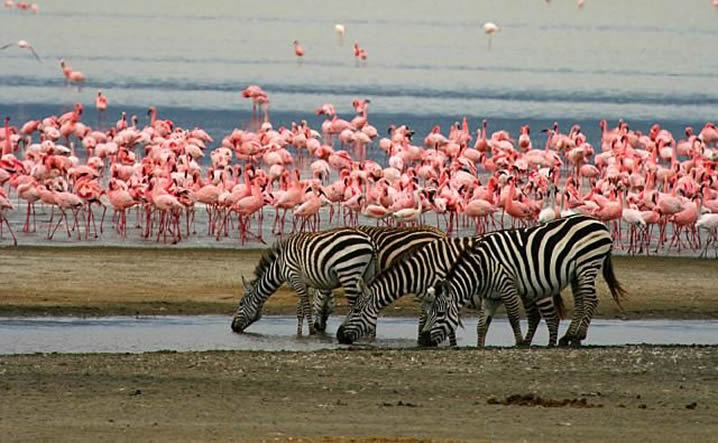 When to visit Lake Manyara

Through the dry season from July up to October, it is the best time for viewing the larger mammals, whereas through the wet months from November to June the period is perfect for bird watching, canoeing as well as watching the spectacular waterfalls.

Accommodation, Where to Stay in Manyara

Lake Manyara Serena Safari Lodge
Lake Manyara Tree Lodge
Lake Manyara Hotel
There is a luxury tree-house fashioned camp, campsites as well as public bands within the park. In addition, a luxury tented camp plus three lodges are seated wall of the Rift Wall on the outer boundary of the park and these, fortunately, overlooks the lake. A number of guesthouses plus campsites can be found adjacent to Mto wa Mbu.

Lake Manyara National Park is another of Tanzania’s small-sized parks blemishing in unique elegance. It covers a total area of 330sq kilometers and 2⁄3 of which is covered up by the lake. This compact park is in fact surrounded by the Gregory rift cliff from the west, the scenic Lake Manyara on the eastern side as well as partitions an area with Ngorongoro.

Right from the park gate, this Tanzania safari trail goes through an expanse of abundant forest jungles, vast plains as well a floodplain with vast scenery over the alkaline Soda lake of Manyara and then blue volcanic highs that rise out of undulating Masaai steppes. The corridor of acacia trees and shrubs is home to your renowned tree-climbing lions, enormous tusked elephants, bushbucks, giraffes, zebras, buffalos, leopards, hornbills, and more. Some klipspringer antelopes are often viewed by the rocky outcrops above an area of searing hot springs that gust next to the lakeshore from the southern end by the park.

Manyara renders the appropriate introduction to Tanzania’s species of birds. More than 400 varieties are already documented within Manyara turning it into one of the finest and foremost bird watching areas in Tanzania. Examples include thousands of pink flamingos looked at on the alkaline lake, bee-eaters, crown eagles, heron, crane flamingoes, spines, pratincoles, pelicans, and cormorants, storks along other waterfowls.

Connected by both roads, rental, or scheduled flight in Arusha, en route to Serengeti and Ngorongoro Crater. It is actually in northern Tanzania’s Arusha area 130km from Arusha town. The park gate lays one and a half hours, 126km to the west of Arusha, on a new tarmac road, close to Mto wa Mbu.

Game drives and also night game drives happen to be fantastic ways to find the wildlife from grassy plains. Canoeing can be encouraged on the lake after the water levels are completely increased.

Cultural visits to the nearby Mto wa Mbu town and even connect to the locals. The park boasts picnicking areas, bush lunch/dinner, mountaineering tours, abseiling as well as nature walks on the escarpment not far away from the park.

The dry season starting from July until October draws in several herds of animals to the lake for some water, affording far better sights on the game. The rainy period of November until June in contrast is great for bird watching as well as canoeing around the lake.

One luxurious tented camp and three lodges perched around the Rift cliff not in the park in front of the lake. There are various guesthouses and also camping grounds with regard to the nearby Mto wa Mbu area.