Home to the largest herd of buffaloes in the world, Katavi national park is Tanzania’s third biggest protected area, situated in Katavi region in the west of the country close to the rift valley.

It is a 4,471 square kilometres area dominated by the Katuma River and Lake Chada floodplains and the seasonal Lake Katavi.  Katavi National park was created in 1974 to protect the wildlife species that exist in its expanses. It is a very remote national park and the least visited among the Tanzanian national parks. Records have it that in 2012/13, out of the 900,000 visitors registered at all tourist destinations in the country only 1500 visited Katavi national park. 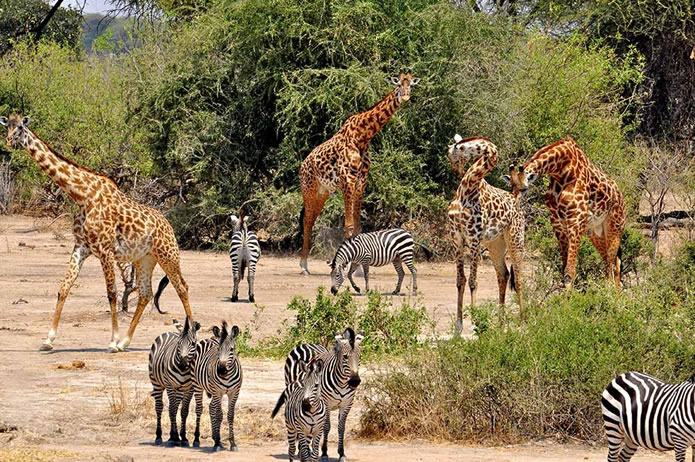 In terms of wildlife, Katavi national park is heavily endowed. It harbours animals like cape buffaloes, elephants, giraffes, zebras and many more.  And also due to the high number of herbivores, predators are attracted to the area for example leopards, lions, cheetahs and wild dogs. Hippopotami and crocodiles are found along the Katuma river which in the dry spell turns into mudholes that can be packed with hundreds of hippos. Poaching and illegal hunting for game meat have led to the decline of the wildlife species in the park but at one time Katavi was one of the natural environments in Tanzania with the largest population of wildlife species.

How to reach Katavi National park

Air travel is the ideal means of transport to access Katavi National park because of its remoteness and long distance away from Dar es Salaam and Arusha. Most of the time, the flights are organised by the safari camp hosting the visitor. The Mbali Mbali Shared Charter operated by Zantas Air Services or Safari Air link is the popular flight service to Ikuu Airstrip close to the Ikuu Ranger post of Katavi national park. It only takes three hours to fly from Dar es Salaam to Katavi and two hours from Mwanza by a small light aeroplane. A flight from Arusha to Katavi is 3 hours too and runs on regulated services only two times a week, particularly on Mondays and Thursdays.

To reach Katavi National park by road transport consists of travelling for long-distance and hours which most of the times are converted to days. The place that connects Katavi to the two great cities of Tanzania is Mbeya Town and it is 550km away from the park. From Dar es Salaam to Mbeya is 838 km, accumulating a total distance of about 1,400km and demanding 24 hours plus of road travel. Arusha is equally far by over 1000 kilometres away from the park requiring over 20 hours of travel.

The percentage of travelling on gravel surface is big henceforth, it would even take much longer than estimated by google maps.

Sighting wildlife species is the major activity tourists engage in while at Katavi national park. The activity is performed on both safari game drives and guided walking tours. However, the game drives are more popular than the walking tours because they cover a wider area range and are less challenging.  The walking safaris though bring tourists up close and personal to nature and the wildlife species it avails. The game viewing session in Katavi national park is unique, secluded and exhilarating since its nature is untouched and also fewer tourists are encountered while on the exploration. The common animals to see on a game viewing excursion in the park include large herds of buffaloes, elephants, giraffes, zebras and carnivores like lions, leopards, cheetahs, hyenas and wild dogs and also countless bird species are present.

Katavi National park offers one of the most exciting and exhilarating camping ambiences in Africa. The open savannah wilderness of Katavi is best enjoyed at night in a dome or lazy camping tent. It is pure nature and raw life here since there are no flushing toilets and showers and the food is prepared on firewood.  Come enjoy the night with friends and family as you gather around the campfire for storytelling, dining and wining and social binding games in the jungles of Katavi as you listen to the sounds of the animals and chirps of birds from far and near.

Other than wildlife encounters, heritage, history and culture are the star attractions of Katavi.

The park has Katabi tree, a legendary tamarind tree that is said to shelter the spirit of a great hunter Katabi. Here, locals and tourists place sacrifices and offerings to pay homage to the greatest hunter of the area. The stone and iron age sites are the other historical places to visit in the park.

Katavi region experiences two climatic seasons annually, namely the dry and wet seasons. The dry season consists of the months of January, February, June, July, August September and October and the wet season has April, May and November.

In the dry season especially from June to October, different animal species in the park gather around River Katuma, Lake Katavi and Chada as their major source of water. Therefore, it is easy for tourists to see a colossal population of animals, prey and predators congregate in the same area.

Also, the game viewing expeditions are best done in the dry season when the grasslands are short, the atmosphere is bright and clear to visibly sight animals and other living creatures.

Where to stay at Katavi national park

Since it is less frequently visited by tourists, there is a handful of accommodation facilities to stay. The few that exist can accommodate all sorts of travellers right from the high-end to the budget tourists. The facilities are mainly luxury tented camps and budget campsites. Some of the popular lodges include Katavi Wildlife Camp, Chada Fly-Camping, Chada Camp, Palahala Luxury Camp, Mbali Mbali Katavi Lodge et cetera. Click here to book a Tanzania safari to Katavi National Park, special rates and huge discounts are available for large groups and long trips.